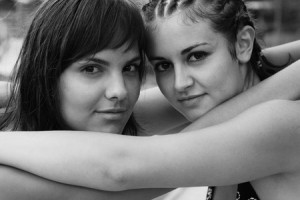 In the Latin culture the role of women is sometimes defined narrowly and women are brought up to be “super” moms and dedicated wives. The family pressure to keep a clean home, raise well-mannered children and be fabulous cooks can be a little overwhelming. You can add onto that pressure that to be a good “wife” and “mother” implies being heterosexual, and find the right “husband” not the right wife.

Latinas,  are professionals, blue collar workers, students, artists, and they all face their own struggles, successes, and secrets.  For we Latinas are as diverse, as shallow, and as deep as our dominant-culture counterparts. Our stories of immigration and oppression are gripping, but they are not only stories of discrimination or acculturation to tell, we also have our gender struggle stories to tell. Some are wives and mothers, yet individuals, too and some of us are lesbians and proud of it. Yet our culture and family does not welcome, always, our “coming out of the closet”. Our stories are as wide and as varied as the hues we come in.

Even the Spanish language conspires against those women who called themselves lesbians or bi-sexuals, because most of the counterpart words in Spanish have a negative connotation. Activists at the Human Rights Campaign had written that “…Although “gay” has the same meaning in Spanish as in English, the word “lesbiana” still has negative connotations. Many Latina women who love women, however, are purposely using the word to reclaim it from those who would use it against them…” (Read More)

On another article HRC states “… Although Latina/o Americans come from various cultural backgrounds, many who come out as gay, lesbian, bisexual or transgender share similar experiences and challenges. Some, who were raised Roman Catholic, must reconcile themselves with the church’s teachings that acting on one’s homosexuality is sinful. Language differences often make finding resources and support difficult, and a lack of LGBT Latinas/os in media and entertainment perpetuates invisibility. Fortunately, however, anecdotal evidence suggests that a growing number of Latinas/os are coming out…”