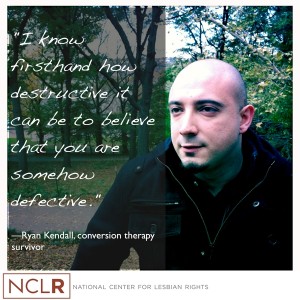 Conversion therapy or restorative therapies are, ethically and intrinsically, wrong when trying to change an individual’s sexual preference based on homophobia and extreme religious beliefs. These types of treatment have been a source of controversy in the United States and other countries. The American Psychiatric Association has condemned “psychiatric treatment, such as reparative or conversion therapy which is based upon the assumption that homosexuality per-se is a mental disorder thus the need to revert the “disease” by changing your sexual preference.The issue is more serious when it comes to youth since they do no have the legal right to oppose their parents’ decisions. Well, for now a victory!

Samantha Ames, Esq. Staff Attorney & Born Perfect Campaign Coordinator for NCLR  just announced, moments ago, the District of Columbia Council unanimously approved a bill that will protect LGBT youth from conversion therapy.  When signed into law, Washington, D.C. will become the third jurisdiction—behind California and New Jersey—to pass legislation protecting LGBT youth from ineffective and harmful practices designed to change their sexual orientation or gender identity. Counsel Ames, explains “… today, the Council sent a powerful message to LGBT youth and their families that they are accepted, supported, and loved. It has used its power to protect the most vulnerable from a dangerous pseudoscience that tells them that who they are is wrong, and reaffirmed the consensus of every major medical and mental health organization in the country that all children are born perfect, regardless of their sexual orientation or gender identity.

Earlier this year, NCLR launched the Born Perfect campaign to end conversion therapy across the country over the next five years by passing laws, fighting in courtrooms to ensure the safety of LGBT youth, and raising awareness about the serious harms caused by these dangerous and discredited practices Their site explains that in the past” …In the past, some mental health professionals resorted to extreme measures such as institutionalization, castration, and electro-convulsive shock therapy to try to stop people from being lesbian, gay, bisexual, or transgender (LGBT). Today, while some counselors still use physical treatments like aversive conditioning, the techniques most commonly used include a variety of behavioral, cognitive, psychoanalytic, and other practices that try to change or reduce same-sex attraction or alter a person’s gender identity…” Learn More about the Born Perfect Campaign. 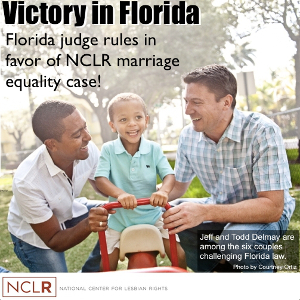 Anti-LGBT opponents have announced they will fight NCLR all the way to the Florida Supreme Court to overturn this victory. Their press release, says “…At NCLR, we have spent more than a decade fighting for the freedom to marry. We have had incredible victories over the last year alone in our cases in New Mexico, Utah, Idaho, Tennessee, and now Florida. We are proud to stand beside Equality Florida Institute, the six plaintiff couples, and our co-counsel in the challenge to the State of Florida’s discriminatory marriage laws…” Well done, Kate Kendell and her team!  Read the Press Release