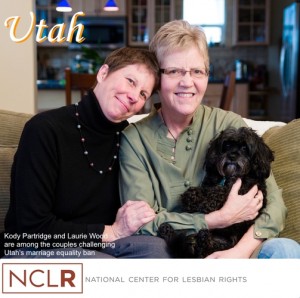 hird federal court of appeals to issue such a ruling. Kate Kendall, NCLR Executive Director, says: “…That makes nearly 40 wins for marriage equality in the last year! Last week, we shared with you that we filed our brief asking the U.S. Supreme Court to hear the Utah case and end the patchwork of legal uncertainty that pervades the relationships of same-sex couples. We also told you of our exciting partnership with Gay & Lesbian Advocates & Defenders Legal Director Gary Buseck and Civil Rights Project Director Mary Bonauto, who have joined our outstanding legal team.

Powerful briefs were filed yesterday with the Supreme Court urging the Court to decide this important constitutional question. The briefs represent the perspectives of families, businesses, and state governments, all urging the Court to strike down discriminatory state marriage laws and to end the untenable hodgepodge of laws which fail to give security and recognition to all couples. Kate thanks all involved and specially mentions the lawyers at NCLR, GLAD, Hogan Lovells, and NCLR lead counsel Peggy Tomisc of Magleby & Greenwood,  for standing with NCLR in their tireless effort to win the freedom to marry for all.  Read More