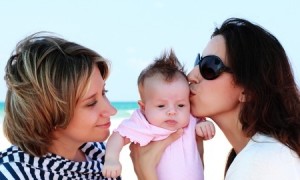 The largest-ever study of same-sex parents found their children turn out healthier and happier than the general population. A study of 315 same-sex parents and 500 children in Australia found that, after correcting for socioeconomic factors, the children fared well on several measures, including asthma, dental care, behavioral issues, learning, sleep, and speech.

“…what this means is that people take on roles that are suited to their skill sets rather than falling into those gender stereotypes…At the same time, two-thirds of the parents reported a perceived stigma on at least one issue tracked by the survey. These stigmas ranged from other people gossiping about an LGBT family to same-sex parents feeling excluded at social gatherings due to their sexual orientation…” Read More

Published in Australia, the study proposes children of same-sex parents enjoy better levels of health and wellbeing than their peers from traditional family units, new Australian research suggests. Read the article So no surprises that when chosen, cherished, and desired, parenting produces more opportunities to love our children despite the gender of the parents.